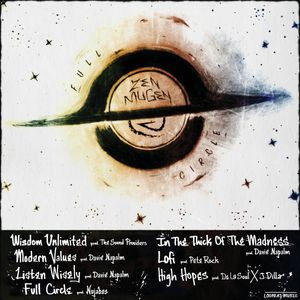 LOOPRAT MC ZenMugen has been working with the collective in the Saint Louis music scene since 2013. Through the years, he has contributed to all five of the group's releases to date, both directly with lyrics and indirectly as a creative support and springboard. His new Demo Tape titled 'Full Circle' sees to an exploration of trials, lessons, and growth ultimately centering on and circling back to the identity he has worked to achieve as an artist.

Production covers a range of influences on the Midwestern sage, both classic and contemporaries. LOOPRAT producer Davie Napalm contributes 3 original beats including the single 'In the Thick of the Madness.' The cover art, white charcoal on black paper, is an accurate depiction of a collapsing black hole created by a physics student with a knack for expressive mediums. Logo and text work done by freeztheartist. Digital edit done by NatKingFlo. Mixed and mastered by Matt Sawicki at Suburban Pro Studios.