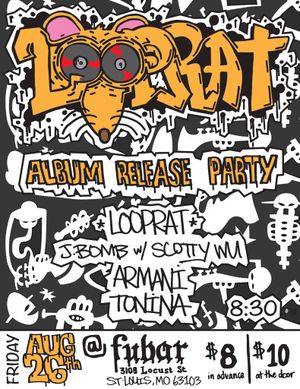 Tomorrow night, August 26th 2016, we will cap off an action packed summer with the release of our new jazzrap album 'How Live?' Join us at Fubar STL for a night of fun and be among the the first to purchase your hard copy of the new release!

Armani
Rarely do we throw a show without the illest spitta in the Lou. Armani is the quintessential emcee. Content, word play, flows, stage presence, freestyles... you name it, he has it. Check out his 2016 offering, (Al)most.
Instagram: @armani_abomb

Tonina
A talented musician and vocalist, Tonina is a University student in music and helped make the new Album 'How Live?' She features on two tracks on the album and was gracious enough to let us borrow her upright bass for recording. We are glad to have her on to showcase her talents as an individual performer and as a contributor to our collective.
Instagram: @champagnemami314